At an elevation of 1706 mts., Lohaghat is 62 kms. away from Pithoragarh on way to Tanakpur and 14 kms. from Champawat district headquarters. Lohaghat which is situated on the bank of river Lohawati is a centre of historical and mythological importance. The scenary and the quietness arround attracts the devout and travellers alike. 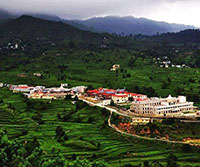 Uttarakhand TourismBaleshwar Temple : Baleshwar is the most artistic temple of the district. There are evidences to the effect that the group of temples dedicated to Baleshwar, Ratneshwar and Champawati Durga had been built by the early kings of the Chand dynasty. The temple once had intricate structural features and a sanctuary with a 'mandap'. The intricate carvings still visible on the ceilings of these temples are an evidence of their ancient glory and artistic excellence.

Gwal Devta : A deity of widespread faith and influence, Gwal Devta also known as Goril or Goll, is considered to be the presiding deity of justice. It is believed that when approached, Gwal Devta dispenses justice to a helpless victim of injustice and cruelty. Historically, Goril a Katyuric prince of Champawat, known for his unwavering justice and fair play, was himself a victim of planned conspiracy hatched up by his step mother, who had him thrown into a river, locked up in an iron cage. Held in high esteem as a symbol of justice, a temple was constructed in his honour after his demise at Golchaurh in Champawat. Ever since, he has grown into a deity of great influence. The temples attracts innumerable pilgrims round the year.

Devidhura : At a distance of 45 kms. from Lohaghat, Devidhura is famous for its Barahi temple where the traditional Bagwal (fair) is held once every year on the festival of Raksha Bandhan.

Excursion :
Uttarakhand TourismMayawati Ashram : 22 kms. from Champawat and 9 kms. from Lohaghat, this ashram is situated at an altitude of 1940 mts. Mayawati shot into prominence after the Advaita Ashram was established here. The ashram attracts spiritualists from India and abroad.

Devidhura : 45 kms from Lohaghat Devidhura is famous for its Varashi temple, where the traditional Bagwal (organised stone throwing between two grops) is held once every year on Raksha Bandhan.

Vanasur-Ka-Kila : This fort is situated at an elevation of 1859 mts., 7 kms. from Lohaghat and 20 kms. from Champawat. (Lohaghat to Karnakarayat is 6 kms. by bus and Karnakarayat to Vanasur-ka-Kila 1 km. by foot.