Diverse in topography, the district of Pauri Garhwal varies from the foothills of the Tarai of Kotdwar to the soul- lifting meadows of Doonhatoli, sprawing at an altitude of 3,000mts., Which remain snowbound during the winter months. Pauri Garhwal is ringed by the districts of Chamoli, Nanital, Bijnor, Haridwar, Dehradun, Rudraprayag and Tehri Garhwal. Filled with places of tourist interest, most locations in Pauri offer a breathtaking view of the snow - laden Himalayan splendour. 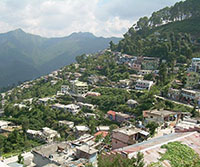 Excursion :
Uttarakhand Tourism Khirsu : The snow-covered mountains of Khirsu offers a panoramic view of the Central Himalayas and attracts a large number of toursits. From here one can get a clear view of many named & unnamed peaks. Lacated 19 kms. away from Pauri at an altitude of 1,700 mts., Khirsu is a peaceful spot, free from pollution. The tranquility of the adjoining thick Oak and Deodar forests and apple orchards, is broken only by the chirping of birds. The ancient temple of Ghandiyal Devta in the vicinity is well worth a visit. Accommodation is available at the Tourist Rest House and Forest Rest House.

Doodhatoli : Doodhatoli situated at an altitute of 3100 mts., is covered with dense mixed forests. Thalisain is the last bus terminus (100 kms. from Pauri), from where Doodhatoli is at a distance of 24 kms. by trek. One of the most pictureque places, it commands a panoramic view of the Himalayan ranges and the surrounding area. The indometable freedom fighter of Garhwal, Veer Chandra Singh Garwali, was enamoured by the place. As was his last wish, a memorial in his name has been erected here after his death. A humble but bold memorial in his name creates a 'never say die' atmosphere under the tall Oak trees.

Uttarakhand TourismJwalpa Devi Temple : It is one of the well known religious places of the entire division and a large number of devotees come here round the year for darshan. It is 34 kms. from Pauri on the main Pauri-Kotdwar road. Every year during 'Navaratras', a special religious festival is held at Jwaladevi.

Binsar Mahadev : Binsar is situated at an altitute of 2480 mts. and is at a distance of 114 kms. from Pauri. Set amidst dense forest of Oak, Deodar and Rhododendron, it is a celebrated place of worship. The temple dedicated to Lord Shiva is of archaeological significance. The central room of the temple is beautifully adorned by the idols of Ganesh, Har Gauri and Mardini. Thalisain, 100 kms. from Pauri, is the last bus stop. From here a 22 kms. bridle path leads to Binasar.

Adwani : Connected by a well maintained 17 kms. long road from Pauri, Adwani is an ideal picnic spot, as it is surrounded by thick forest and devoid of the hustle & bustle of the town. There is a Forest Rest House one can stay.

Tarakund : Situated at a height of 2,200 mts., Tara Kund is a picturesque spot amidst lofty mountains in the Chariserh development area. A small lake and an ancient temple adorn the place. The Teej Festival is celebrated with great gaiety when the local people come here to worship and pay homage to God.

Kanvaashram : Situated at a distance of 14kms. from Kotdwar, Kanva Rishi Ashram is an important place from the historical and archaeological point of view. It is believed that Sage Vishwamitra meditated here. Indra, the king of Gods, was scared by his intense meditation, and sent a beautiful heavenly damsel named Menka to disturb him. Menka finally succeeded in diverting Vishwamitra's attention. After birth to a girl she went back to heaven. The girl later became Shakuntala who got married to the prince of Hastinapur and gave birth to Bharat, the prince after whom our country is called Bharat.Accommodation is available at tourist complex, Kanvashram.

CHILA : Chila Wildlife Sanctuary a heaven for animal watchers is just 8 kms. from Hardwar and 21 km from Risikesh. Located on the banks of river Ganga in the heart of Shivalik hills, Chila is a part of the famous Rajaji National Park. The fauna include elephants, spotted Deer, Stag deer, Neelgai bull, Wild beer, Fox, Porcupine, Jungle fowls and Peacocks. Beside these, migratory birdsare also seen on the river Ganga. There is a Tourist Rest House in addition to a Forest Rest House.

NEELKANTH : Just 32kms. from Rishikesh via Barrage and 22kms. via Ram Jhoola, this place abounds in religious fervour, mythological significance and picturesque surroundings. According to a legend, this place derived its name from Lord Shiva. It is believed that it was here that Lord Shiva consumed the venom which emanated durimg the ' Samudra Manthan ' due to this, His throat became blue in colour, thus giving Shiva the name of Neelkanth. Centuries old temples here reserve in their fold the celestial aura and legendary ambience.

At 926 meters, amidst three valleys (vishnukoot, Brahmakoot and Manikoot ) and on the confluence of Madhumati and Pankaja rivers awaits Neelkanth mahadev. Neelkanth Mahadev is 22kms. from Swargashram. The 12 kms. trekkable road is surrounded by dense forests, a sight every trekker would love to behold.

Kalagarh : Situated at a distance of 48 kms. from Kotdwar, Kalagarh is an ideal places for nature lovers. The dam across Ram Ganga river is also worth visiting. Accommodation is available at the irrigation & Forest Rest Houses.