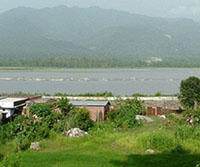 In the vicinity of the spectacular Kumaon lies the district of Udham Singh Nagar which was a part of district Nainital before it gained the identity of a separate district in October 1995. The district was named in memory of Late Shri Udham Singh who was a great freedom fighter and who killed General Dyre after the brutal Jaliyanwala Bagh massacre. The district comprises of three main sub divisions Rudrapur, Kashipur and Khatima and is surrounded by the exotic Himalayan ranges.

Excursion
Kashipur was known as Govishan during the time of harsha (606-647 AD), when Yuan-Chwang (631-641 AD) visited this region. The ruins of the large settlement of those days are still to be seen near the city. Kashipur is named after Kashinath Adhikari, the founder of the township and one of the officers of the Chand rulers of Kumaon in the middle age. Poet Gumani has written a poem on thsi town. Girital and Drona sagar are well known spots and are associated with the story of the Pandavas. The Chaiti mela is the best known fair of Kashipur. Today Kashipur is an important industrial township. In autumn (after mansoon) one can see the snowclad peaks of Trishul and its surroundings

Chaiti Temple : At a distance of 2.5 kms. from Kashipur bus stand on the Kashipur-Bajpur route, is situated the widely known temple of Chaiti Devi, Every year in the month of March during 'Navratras' a grand fair is held here and lackhs of pilgrims come here to worship the Goddess from various places.

Giri Sarovar : This enchanting lake is situated at a distance of 2 kms. from kashipur bus stand on the Kashipur - Ramnagar route and is an ideal picnic spot. A Tourist Rest House and private hotels are available for night stay.