Located in the foothills of Shivalik range, Haridwar is reputed as the gateway to the four pilgrimages in the Uttranchal region. Visit this sacred place that will purify your body, mind and the soul. Spend some time on the ghats in Haridwar that acquire a unique charm in the evening with countless diyas floating in the waters of Ganges. Down the ages Haridwar has also become a major learning center for science, arts and culture. 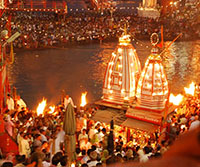 Haridwar : Gateway to the four pilgrimages in the Uttrakhand region, is located on the foot hills of Shivaliks. It is on the banks of River Ganga. The Ganga leaves the mountains and enters the plains with Haridwar being the first major town on the plains. Though the Ganges does not lose its rapids completely nevertheless it becomes very quite and calm here. The water is clean and people prefer taking bath on the numerous ghats built on the river shores. It is said that taking bath here purifies the soul and opens the way for the ultimate freedom, Nirvana. Haridwar has earned fame as being the place which has been blessed by the trinity of Lord Shiva, Vishnu and Brahma. It is also one of the major Shaktipeeths.

Haridwar has since ages been a source of Ayurvedic medicines and has been providing herbal remedies. Haridwar one of the first towns to be developed on Ganges is still lush and green with forest and trees. With Rajaji Park in the vicinity Haridwar has also been the destination for the wildlife and nature lovers. The city acquires a unique charm in the evening when the ghats become breath takingly beautiful with thousands of Diyas and Marigold floating in the waters of Ganges.

Tourist Attractions :
Har Ki Pauri
The sacred ghat was constructed by King Vikramaditya in the memory of his brother Bhartrihari. The golden reflection of floral diyas in the river Ganges is the most enchanting sight in the twilight during the Ganga's aarti ceremony at the ghat.

Chandi Devi Temple
This temple is on the top of a hill called the Neel Parvat, on the other side of the river Ganga. The story goes that Chanda-Munda the army chief of the demons Shumbh-Nishumbh were killed by Goddess Chandi hence the name Chandi Devi. It also said that Adi Shankaracharya established the original statute of Chandi in 8th century AD. The King of Kashmir, Suchat Singh, constructed the temple in 1929 AD. Chandi Devi is a three km trek from the Chandi Ghat. Chandi Devi Temple is now accessible by a ropeway also, by the name of Chandi Devi Udankhatola, which starts near Gauri Shanker Temple. The length of Ropeway is 740 mts and height 208 mts. There is a dense forest on the other side of the hill inhabited by elephants and other wild animals.

Uttarakhand TourismMansa Devi Temple
The temple on the top of Bilwa Parvat is dedicated to the Goddess Mansa Devi. Here, one statue of the Goddess has three mouths and five arms while the other statue has eight arms. A beautiful view of the city can be had from this place. There is a Ropeway service by the name of Mansa Devi Udankhatola from lower station to the Mansa Devi Temple which takes only 5 Minutes to reach the Temple. The length of Ropeway is 540 mts and height 178 mts.

Daksha Mahadev Mandir
This temple is an ancient shrine located at Kankhal, and is one of the five sacred places around Haridwar. It is associated with Sati, the spouse of Lord Shiva who immolated herself to preserve his honour on being insulted by her father, King Daksha Prajapati. This incident provoked the disciples of Mahadev and killed King Daksha. But later Lord Mahadev brought him back to life. The temple is an attribute to this legend. Daksha Mahadev Temple is also known as Shri Daksheshwar temple. It has a gilded image of a serpent symbolising Shiva.

Uttarakhand Tourism Saptarishi Ashram
The Ganges flows in seven streams in front of this Ashram, hence this place is also called Sapt Sarovar. It is said that Saptrishis (Seven sages) trapped the Ganga and agreed to release the River on King Bhagirath's request. The Ashram commemorates the event. This is about 5 km north of Hari ki pauri, where the Ganga had to split into seven streams to avoid the displeasure of Sapta Rishis.