At the hill resort of Kausani the mountains rise so dramatically as if to reach the heavens. In fact not just Kausani the entire Kumaon Hills have been known for their idyllic beauty with the huge mountains silhouetted against the sky. Kausani was originally called Valna. Kausani offers the magic of the deep pine forests and the majestic mountains. Kausani the birthplace of the famed poet Sumitra Nandan Pant and is often referred to as the 'Switzerland of India'. 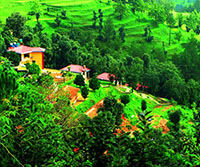 The major attraction at Kausani is that is offers wondrous vistas of the Kumaon Himalayas. You may enjoy the endless stretch of famous peaks like the Nanda Devi, Trishul, and the Nandakot. While in Kausani you may move to the various vintage-points in order to capture the spectacular sights of the snow-capped peaks of the Himalayas that are spread majestically across the 300 km range. The sunrise and the sunset are the special moments for the nature lovers and the photographers alike.

Best Season : The town is accessible all year round. For those who wish to avoid the cold, the best season is between April and June and again between September and November. Summer months will require light woollen clothing and winter- heavy woollen.

Accommodation : One can stay at the Holiday Home of the Kumaon Mandal Vikas Nigam. Phone: (05969) 45015. Other accommodation includes the Forest Rest House, the Zila Parishad Dak Bungalow, Anashakti Yoga Ashram, the State Bungalow and a few privately run hotels such as Pine View Hotel and Himalaya Hotel. There are many small local eateries that offer simple and mainly vegetarian food.

Tourist Attractions :
Kausani is frequented by tourists for the panoramic views of the Himalayas. It offers excellent sightings of the Trisul (7,120m), Nanda Devi (7,816m) and the Panchchuli (6,904m). Frozen in time, this backdrop makes Kausani the perfect place for a holiday with the family. Kumaon at its best.

Anasakti Ashram : A quiet and revered place where the Father of the Nation spent some days. Set against the breathtaking beauty of the Himalayas, this place has been made into a memorial in his memory.

In 1929, Mahatma Gandhi spent 12 days here. He was so enamoured of Kausani that he called it the Switzerland of India and brought his thoughts out in his book called Anasakti Yoga. The place where he stayed is called the Anasakti Ashram. Earlier the guest house of a tea estate now its an ashram and offers a good resting place for travellers and can accommodate 300 people. Every evening prayers are conducted in the main hall. It also has a library. There is nothing like the mesmerizing Himalayan sunset and sunrise from the Ashram premises.

Pant Museum : The famous poet of Hindi literature, Sumitranandan Pant was born at Kausani. A little away from the bus stand is a museum named after him. The house which has the museum is the poet's house of his childhood days. His daily use articles, drafts of his poems, letters, his awards etc. are displayed here.

Lakshmi Ashram : 1 km away from the Anasakti Ashram, this place is a center run by women who do social service. Gandhiji's disciple, Sarala Behen spent her life here doing social service. This ashram is located in a solitary area in a dense jungle.