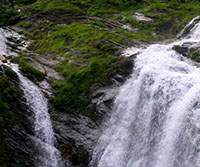 which lies in the arms of the heavenly Himalayas, is the ideal choice for one who seeks beauty and adventure. This easternmost hill district of the Uttaranchal Pradesh is often referred as 'Miniature Kashmir'. The district of Pithoragarh came into being in 1960 when it was carved out of the district of Almora. It borders with China (Tibet) on the north and Nepal on the east. The northern part of the district is thinly populated and is adorned with many lofty snow covered peaks like Nanda Devi (east), Nanda Devi (west), Trishul, Nandakhat, Rajrambha, Panchchuli group and many others. Below these lofty snow bound mountains are many charming mountains are many charming alpine meadowsw and glaciers, the main being Milam glacier, Ralam glacier, Namik glacier and Sunder Dhunga glacier.

Pithoragarh City : Nestling in a small valley 5kms. long and 2kms. wide, the town of Pithoragarh was an important landmark of the chand Rajas of kumaon and was known as soar valley.

Pithoragarh is a treasure house for visitors, mountaineers, botanists & religious minded tourists. The Mansarovar Yatra route is a delight for trekkers and adventure seekers.Many rivers originate from the lofty pithoragarh mountains, thus providing ample scope of water sports. The dense forests around have a wide range of wild flowers & animals including peacocks, elephants, tiger, musk deers and snow leopards. The charming & colourful people of Pithoragarh celebrate all festivals and religious ceremonies with great fanfare & devotion.

Excursions
Uttarakhand TourismSituated 7 Kms away by bus through an uphill climb Chandak constitutes the northern of Soar Valley. The famous temple of Mostamanu is 2 Km from Chandak. Chandak offers a fascinating view of the Himalayan ranges and the sprawling Soar Valley.It is a potential hang gliding resort and the magnesite mining factory is located too here.

Gangolihat : An important religious place and rich in folk culture and ancient myths , is situated 77 Km from Pithoragarh . It is particularly well known for the famous Mahakali temple where the Shakti Peeth was installed by Shankaracharya himself. During Navratries a fair is held on the occasion of which devotees offer pujas-along with sacrifices. 2 Km from Gangolihat near the Mankeshwar temple are the ruins of the fort which once belonged to the Mankotis -an obscure dynasty of Kumaon region. 2 Km away is Uprara, the native village of poet 'Gumani', the first Kumaoni poet, who also wrote in Hindi, Sanskrit and Nepali with great dexterity and command. 4 Km east from Uprara, near the village of Tamanauli is the Bharbhyo cave.

Chaukori : Eleven Km away from Berinag, Garaun water falls four Kms to the east of the Berinag, Musk Deer Farm at Kotmanya, Him Darshan Kutir at Dharamghar.

Thal : An important transit station for Mun- syari and Chaukori (Berinag). Thal is 62 Km away from Pithoragarh and is situated on the banks of Ram Ganga.

Places of Tourist Attraction : Ek Hatiya Temple, a monolithic shrine in Amiya village is 2 Km away from the motor road.

Kot Gari Devi : Situated about 9 Kms from Thal the temple of Kotgari is held to be the final divine court of appeal for the deprived and the victim of cruelty and injustice.

Didihat : 55 Kms from Pithoragarh, Didihat is situated at an elevation of 1725 meters.

Munsyari : Munsyari, the center as well as the gateway of Johar region is situated 154 Km from Pithoragarh at an elevation of 2298 meters and is snuggled in the folds of snow clad mountains.

Dharchula : Situated at the banks of Kali river at the border of Pithoragarh district, Dharchula is 94 Km from Pithoragarh and is an important camp along the Kailash Mansarovar, Chotta Kailash and Narayan Ashram route.

Jauljibi : A point of confluence of the river Gori and Kali and of three different cultures , is situated at a distance of 77 Km from Pithoragarh. During the autumn season Jauljibi pulsates with an important trade fair which is anindication of the cultural and commercial prosperity of the region. Along the Kailash Mansarovar route, from Gunji (3500 m), one can move along the quieter Kali to walk to 10 Km to reach Kalapani (3600 m). There are pine, bhojpatra and juniper forests in this region. Although the river has been coming all the way from Lipulekh pass, the small pool formed under a huge rock is considered to be the source of the Kali. There are snow -clad mountains all around and Vyas's cave is to be found on the mountain in front of Rishi Vyas that the region is known as Byans. There is also a hot water spring at Kalapani.

The department of tourism proposes to create and provide necessary infrastructure, equipments and the allied facilities for adventures sports like:
• Hang Gliding,
• Para Gliding
Gliders can be made available on hire and conveyance to the gliding point and first aid facilities can be provided. Chandak, Munakot and Dwaj have been proposed into gliding points.